Fakfak is a city in Indonesia that has an increasing population every year. Another exciting thing is that Fakfak is the only city in West Papua with many Indian and Arab Muslims. Are you curious about the uniqueness of this city? Let’s take a look at the history, cultural identity, and tourism at Fakfak Regency.

A Brief History of Fakfak Regency

Before having the name Fakfak, this area was known as Kapaur. Historically, Fakfak was a port city with ties to the Sultanate of Ternate. Then, this sultanate permitted the Dutch colonial government to start settlements. Until now, the Fakfak regency still has several colonial buildings from settlements in the past.

In addition, the city of Fakfak has a small community of Indonesian Arab and Indian Muslims due to the descendants of traders who came to Papua in the 19th century. This minority population exists because Fakfak is a port city. In other words, it is the only place in West Papua with a diverse community. You can still find Fakfak people who are descendants of traders until now.

The tribe in the Fakfak district named Mbaham Matta Wuh prepared three stones in order to make the stove stable on it. In this case, the furnace symbolizes life; the three stones symbolize you, me, and them. It is also the basis of tolerance in the Fakfak area because it is a predominantly Muslim location with a sizeable Christian minority.

For this reason, the philosophy in the Fakfak regency says that regardless of religion, it is still family. To symbolize this philosophy, there is a momentum located in the centre of Fakfak city as a symbol to commemorate multiculturalism and tolerance. It makes the people in Fakfak West Papua respect each other and live in peace. 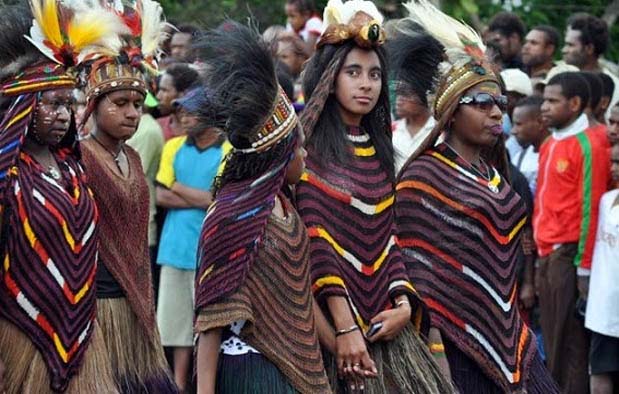 Fakfak is a district located on the Bird’s Head peninsula, so it is very strategically located and can be reached from the city centre. In Fakfak Regency, you will be presented with various exciting and beautiful tourist attractions such as waterfalls, savannas, beaches, and so on. However, there is one beauty that you can enjoy, namely Maredred Waterfall.

It is one of the natural beauties you can visit while on vacation in Fakfak, Papua. The view of the river with rock cliffs is the highlight of this genuine tour. Besides enjoying the beauty of the waterfall, tourists will see a panoramic view of the nutmeg garden and views of the tropical rainforest. In addition, there are also endemic animals that you can find easily, such as Kakak Tua and Cendrawasih.

In addition, you can also find Kayuni Waterfall, which is also a mainstay in Fakfak Regency. This tourist location has a beautiful and unique natural panorama because it is still beautiful. This tourist spot is also easy for tourists, not far from the main road. Therefore, you can easily get it to enjoy its natural beauty in West Papua.

If you look closely, Fakfak has a stunning beauty. This district in Papua has a long history with characteristics and uniqueness that cannot be found in other areas. Even though minority communities live here, they can respect the existing multiculturalism and live side by side in this region.

West Papuan Tomako: Used to Be a Weapon, Now a Precious Dowry

For West Papuan, preserving tradition is not only about keeping it but also finding value in it. Tomako or the traditional stone ax is used all over West Papua, with different names to some of […]

6 Universities for the Great Academics for West Papua

Every aspect should contribute to each other properly to establish great academics for West Papua. Those aspects can be from the government, society, the education actors, and the good circumstance. Moreover, The Minister of Education, […]

Papua has great potential from its natural and human resources. For this reason, the government is aggressively pursuing development in eastern Indonesia. One of them is creating a place for young people, better known as […]